I investigate the effectiveness of a Reduced Coulomb Energy (RCE) Neural Network on the classification of the University of California, Irvine (UCI) Bupa liver disorder data set. I investigate seven (7) different versions of the data set, four (4) un-coded and three (3) binary coded (to a higher dimensional feature space) data sets applying various feature vector dimensionality reduction strategies. Finally, for all seven (7) datasets I apply a feedback-tuning algorithm. In summary, I receive a best case error rate of 20% and ambiguity of 31%, when I apply my feedback-tuning algorithm (using a learning rate of η=0.25) to the un-coded data set that reduces the feature vector dimensionality to half the original size.

Why is this an important problem?

A medical diagnosis contains a test pattern with features such as symptoms, patient history, and laboratory tests. The doctor uses this test pattern to diagnose, or classify the patient. Doctors and patients can benefit if the Doctor treats the diagnosis as a classification problem, and can arrive at a classification model with low error [Bojarczuk 27]. “Medical data often seem to contain a great number and uncertain or irrelevant features. How to extract enough necessary and useful diagnostic rules used to be highly depended on the clinical experience [Kahramanli 9].” I investigate if a RCE NN can extract enough necessary and useful diagnostic rules from the BUPA liver disorders data set, to reduce dependence on clinical experience, and instead put the intelligence in the pattern classification model.

What work has been done before?

Pattern classification represents distinct classes through disjoint regions formed by feature space partitioning. Most classifiers partition non-overlapping regions and map each of these to a class. In RCE networks, however, a class may have one or more regions, and regions can overlap. A RCE net contains three layers, the input, output and hidden. The input layer contains one node for each of the features, totaling the feature vector dimension. The output layer has one node for each class. In the hidden layer, each node represents a prototype. Each class connects to either one or a cluster of prototypes. A RCE net contains two modes, learning and classification. The learning mode executes feature space partitioning, adjusts connection weights between input and hidden layer, and reduces thresholds in hidden nodes to eliminate wrong activations. The classification mode makes class membership decisions based on the prototypes and their influence fields. Some regions may have multiple class affiliations, and the RCE net labels these regions “ambiguous.” [Li 847] 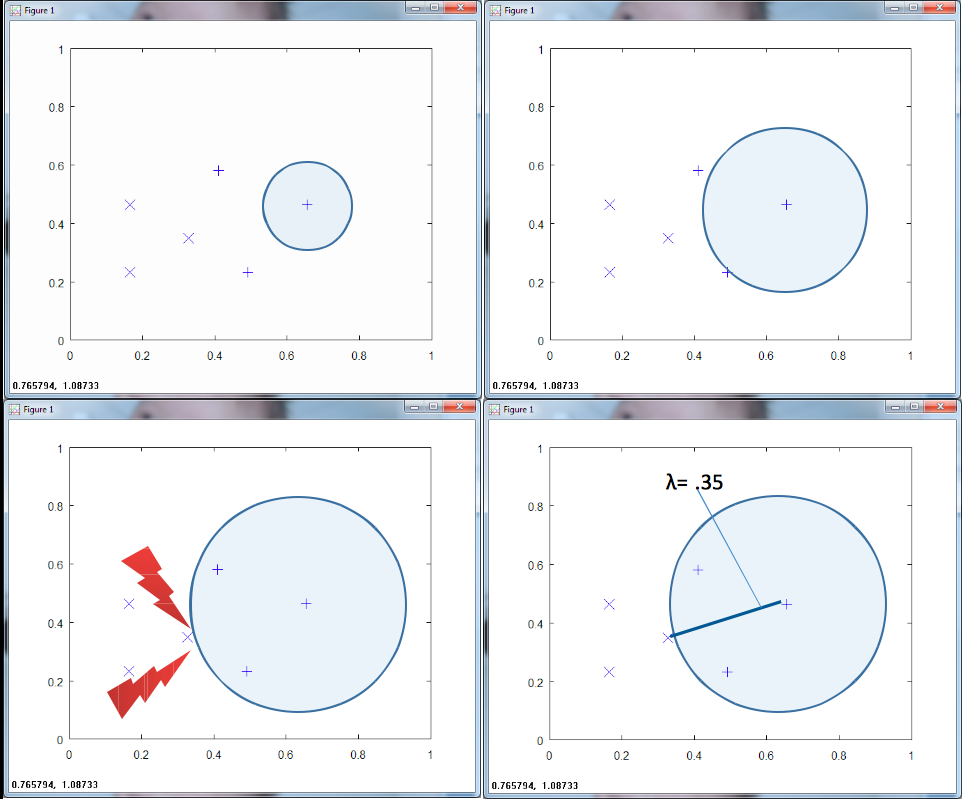 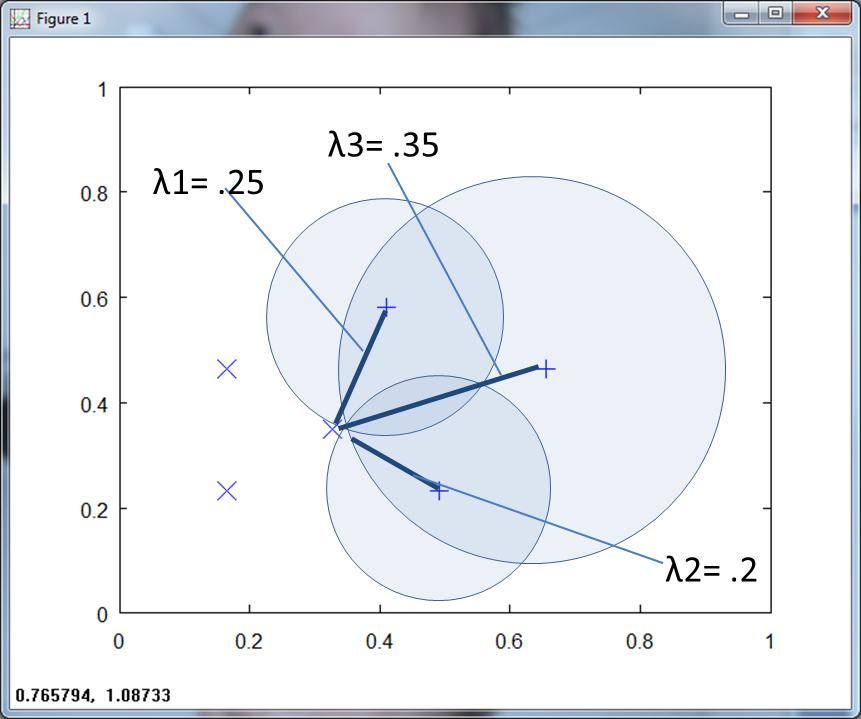 Figure 2 above shows λ for the three training points of class two (marked by a “+”).

Figure 3 below depicts λ for both classes, notice how they overlap. 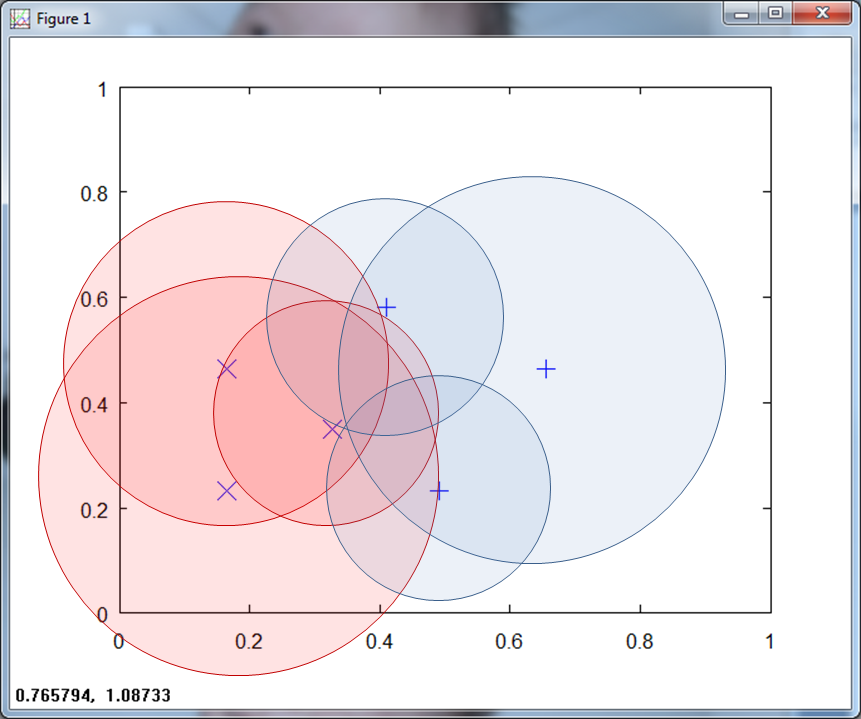 Scofield defines ambiguous regions as "point sets in the state space of a system which are labeled with multiple class affiliations. This can occur because the input space has not carried all of the features in the pattern environment, or because the pattern itself is not separable." [Scofield 5]. The RCE net reduces the overlapping region by setting a maximum λ, as shown in Figure 4 below. 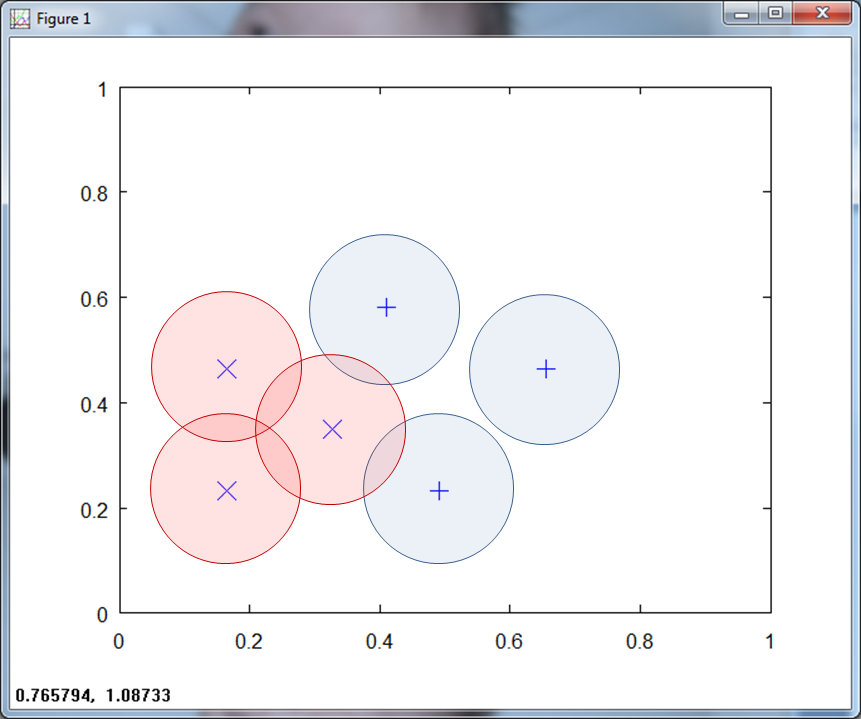 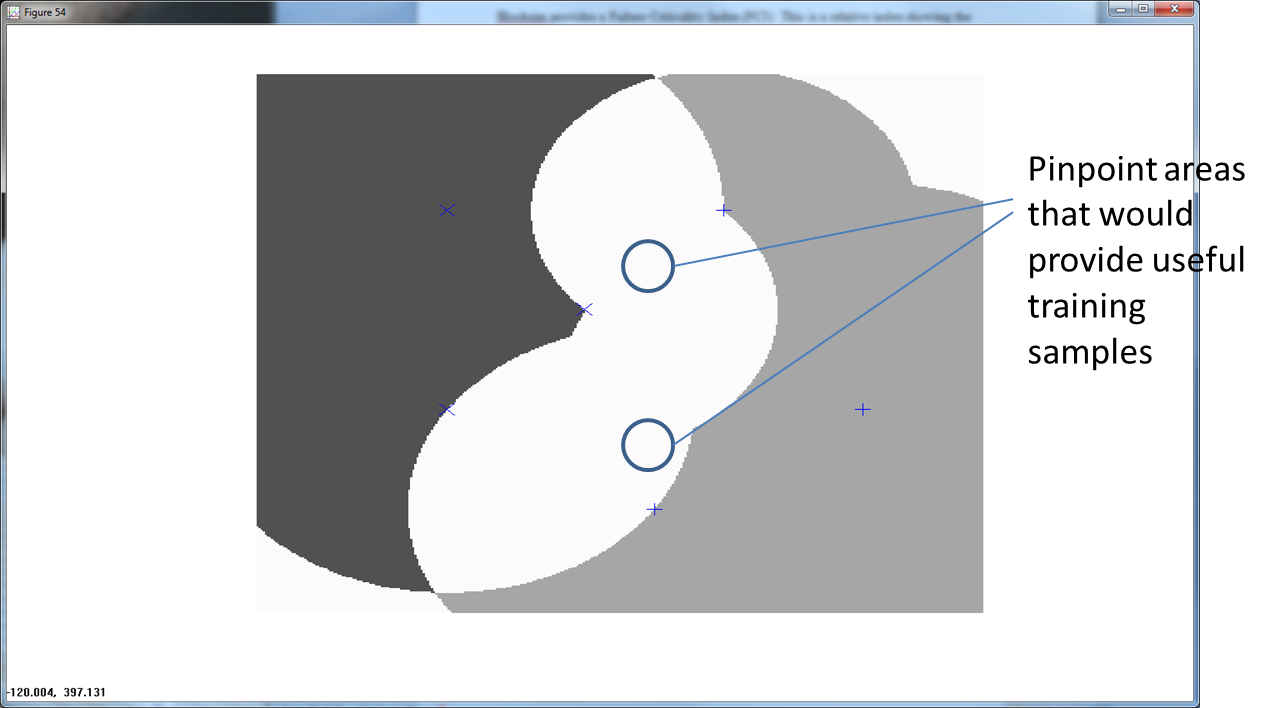 Getting training samples from this ambiguous area helps to better define the nature of the feature space.

Once the training phase completes, the RCE net classifies the test points. RCE nets belong to the family of exemplar neural net classifiers, which “perform classification based on the identity of the training examples, or exemplars, that are nearest to the input. Exemplar nodes compute the weighted Euclidean distance between inputs and node centroids [Lippmann 49].” RCE nets create hyper-spheres around training points. The related hidden layer nodes have “high outputs only if the input is within a given radius of the node’s centroid. Otherwise, node outputs are low. The classification decision is the label attached to the nodes with high outputs [Lippmann 51].” The RCE net classifies a region ambiguous in the case of no outputs or outputs from multiple classes.

Lippmann summarizes the benefits of RCE:

This classifier is similar to a k-nearest neighbor classifier in that it adapts rapidly over time, but it typically requires many fewer exemplar nodes than a nearest neighbor classifier. During adaptation, more nodes are recruited to generate more complex decision regions, and the size of hyper-spheres formed by existing nodes is modified. Theoretical analyses and experiments with RCE classifiers demonstrate that they can form complex decision regions rapidly. Experiments also demonstrated that they can be trained to solve Boolean mapping problems such as the symmetry and multiplexer problems more than an order of magnitude faster than back-propagation classifiers. Finally, classifiers such as the RCE classifier require less memory than k-nearest-neighbor classifiers but adapt classifier structure over time using simple adaptation rules that recruit new nodes to match the complexity of the classifier to that of the training data" [Lippmann 51]

I solve the problem by creating a family of MatLab/ Octave functions from the ground up, identifying the key features and then running the reduced data set through my algorithms (See Appendix). I then create a feedback approach, and identify the ground rules that yield the lowest error. If interested, you can download my Octave code from GitHub here.

Inappropriate normalization presents the first roadblock in my investigation. Normalizing between zero and one causes otherwise distinct training points from different classes to have the same magnitude. For most classification algorithms, this creates “built-in error.” For RCE nets, this results in “built-in ambiguity.” I depict this in Figure 7 below.

In terms of feature reduction, I use several methods, including Fisher’s discriminant ratio, divergence, Bhattacharyya distance and scatter matrices to select feature subsets.

I also run a series of analysis on binary coded Bupa data, increasing the feature dimension. For example, I take the “mcv” feature and map it into five dimensions. For mcv, I create five categories, for the ranges [0,64),[65 85),[85,90),[90,95),[95,200]. The value mcv=77 for example, mapps to the five dimensional vector [0 1 0 0 0]. The value 92 becomes [0 0 0 1 0]. This creates four new input nodes for mcv, and four of the five are always zero for any given value of mcv. I perform similar binary mapping for all the features in the BUPA data set, increasing the feature dimension from six to thirty-three (See appendix). [Kahramanli 9]

Li presents two training approaches. The first approach reduces the threshold λ of a hidden node “such that the wrong activations of this node is eliminated. This process occurs when an input pattern activates some hidden nodes which are not committed to the same class as the input pattern [Li 848].” My feedback approach uses his second approach that tunes the weights between the input and hidden nodes. The RCE net commits each hidden node to an output node of one class. If the net cannot correctly classify a known exemplar, “change weights between input nodes & hidden nodes until you activate this node [Li 848].” We must take care in changing the input to hidden weights of an exemplar classifier, since it “brings forth the potential of a training procedure whose error criterion is non-convergent [Hudak 853].” The nature of an exemplar classifier is such that changing the weights to one hidden node in order to activate it may throw off the balance of the system, and cause other patterns to become incorrectly classified. 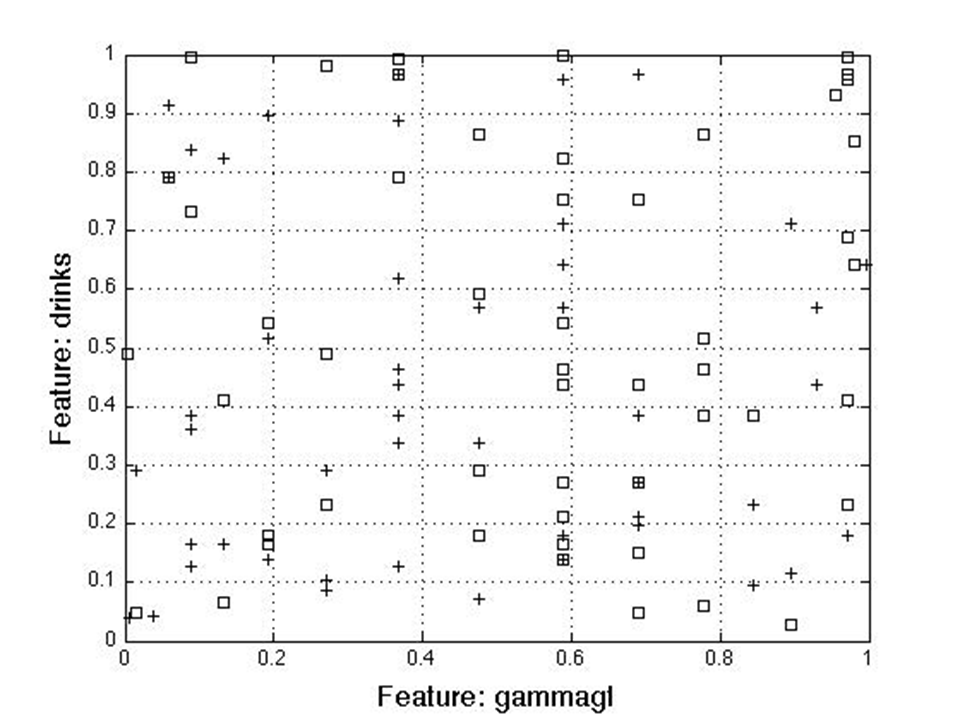 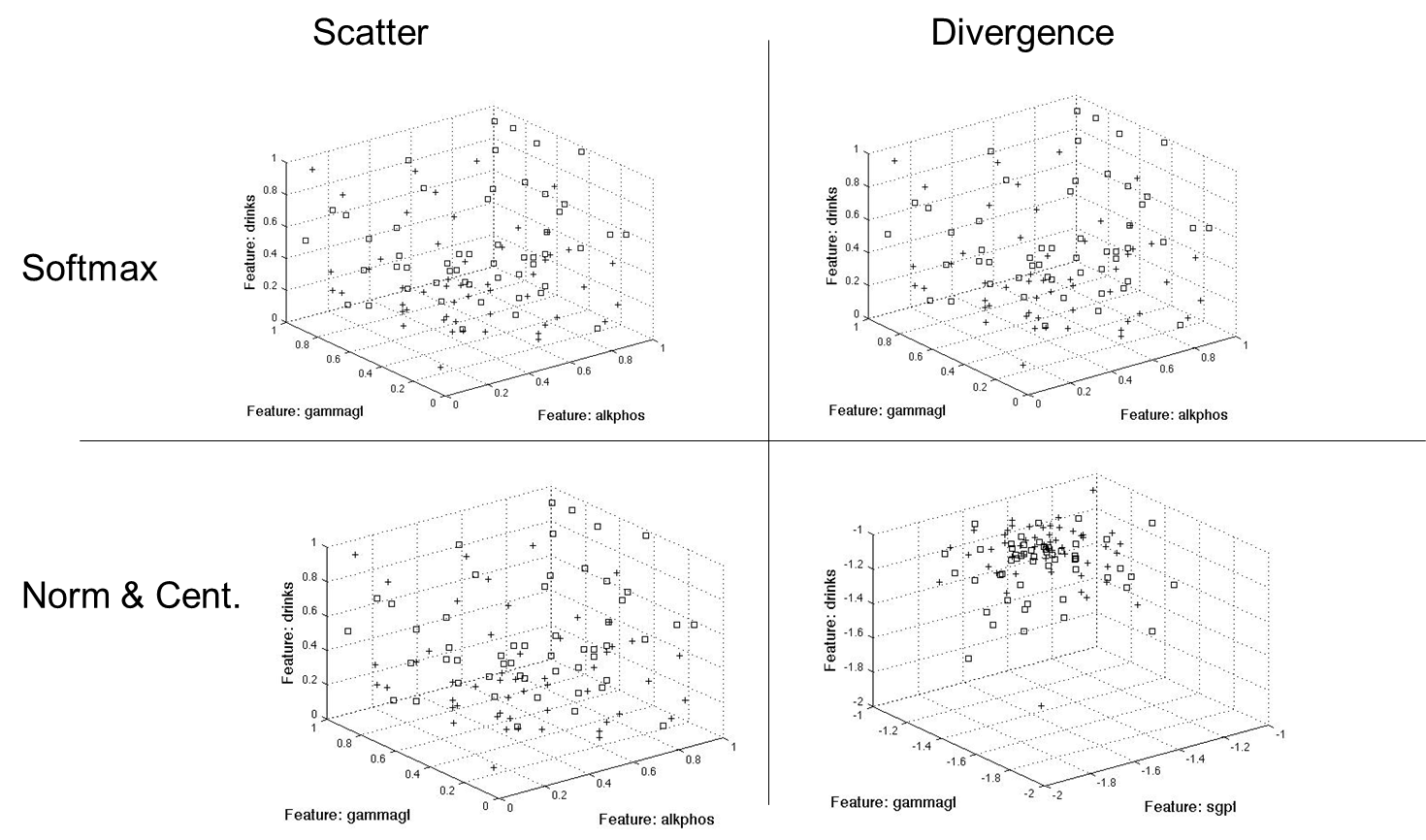 In general, coding the data does not give us any gain, either in the ‘feedback-tuned” case or the “non-feedback-tuned” RCE net case. All un-coded strategies yield lower error and ambiguity than the coded strategies, with one exception (when feedback tuned, the fifteen (15) feature coded data set yields lower error and ambiguity than the five (5) feature un-coded data set). In all cases (coded and un-coded), however, paring the feature space down yields less error than using all features, with one exception. For feedback tuning, the coded “all features” feature vector performs better than the coded ten (10) feature vector.

Now let’s look at the usefulness of my feedback strategy. The table below shows the gain (or reduction in error/ambiguity).

Lippmann and Hudak criticize RCE nets. Lippmann writes, RCE nets “may require large amounts of memory and computation time [Lippmann 49].” Hudak writes, “Viewing RCE as an incremental nearest-neighbor classifier with hyper-spheres lads to the conclusion that the hyper-spheres are not positively contributing to the performance of the classifier. At best their presence is ineffectual, but their management during training entails a computational cost that is not justified by these findings [Hudak 852].”

I experience a “computational cost” during management of the RCE net training. Iterating through 20 candidate values of η, and then iterating 200 learning steps for each takes tens of minutes. Once I identify the proper weight tuning for the data, however, classification occurs in real time. RCE does have benefits, due to the ambiguity. Even Hudak writes, “hyper-spherical classifiers can recognize patterns from an unknown class as not belonging to any class known to the classifier. If true, this would be an advantage over the nearest-neighbor classifier [Hudak 853].”

In conclusion, binary coding does not help reduce error/ ambiguity. Reducing the feature set on the un-coded data reduces error/ ambiguity. My feedback-tuning algorithm, while computationally expensive, reduces error/ ambiguity in all cases. The feedback-tuning algorithm yields the greatest gain on the poorer-performing coded data set. The best case scenario shows reducing the un-coded feature vector to half its dimension using the features “alkaline phosphotase, “gamma-glutamyl transpeptidase” and “number of half-pint equivalents of alcoholic beverages drunk per day” and feedback tuning using a learning rate of η=.25. This yields an error of 20%, and an ambiguity of 31%.

If you enjoyed this blog post, please check out these related blog posts: