Machine Learning engineers use Probabilistic Neural Networks (PNN) for classification and pattern recognition tasks. PNN use a Parzen Window along with a non-negative kernel function to estimate the probability distribution function (PDF) of each class. The Parzen approach enables non-parametric estimation of the PDF.

In this blog post I will discuss the following

What is a Parzen PNN?

The Parzen Probabilistic Neural Networks (PPNN) are a simple type of neural network used to classify data vectors. This [sic] classifiers are based on the Bayesian theory where the a posteriori probability density function (apo-pdf) is estimated from data using the Parzen window technique.

In action, the PPNN mechanics are easy to follow. The PPNN takes a training vector, dot products it with the weights of the hidden layer vector and then chooses the winning class based on the highest output value. The next section includes an Animated cartoon that shows the PPNN visually.

Animated example of the Parzen algorithm

Suppose you have three classes, and the following training data:

Now let's take a look at the classification approach using the familiar neural network diagram. The input layer (bottom) includes our test pattern ( X1 = 0.75, X2 = 0.25), the hidden layer includes weight vectors assigned to classes based on the train patterns. The PPNN then connects the hidden layer to the appropriate class in the output layer.

The Mathworks PPNN web page specifies that we must normalize both our weight vectors and training vectors.

This next section shows different approaches to normalize the training data.

I use the following data set for this trade.

Here is a plot of the training data. 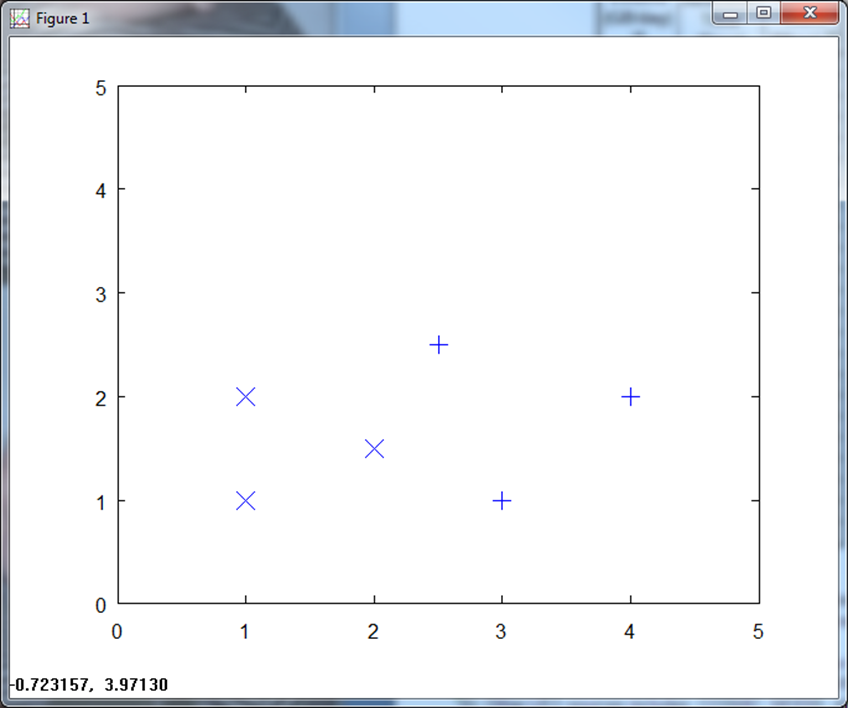 Note that in this toy example, we can set up a simple classifier via a vertical line at X = 2.25 and just use the x values to decide. Never mind that, though, since the point of this section is to illustrate different normalization techniques and then look at the effectiveness of different classification approaches. 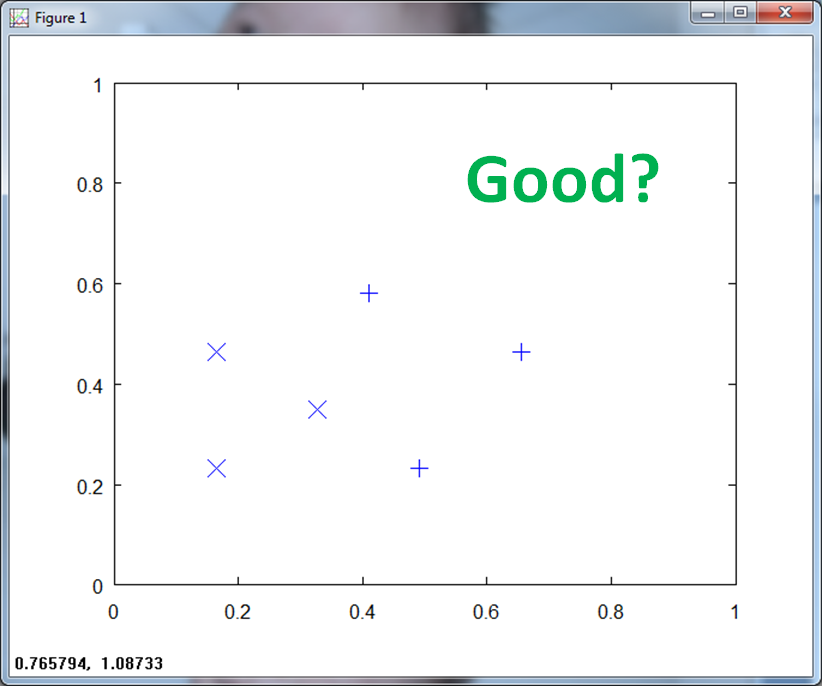 If we center the data and normalize, the scale goes from -1 to 1 on both axis. 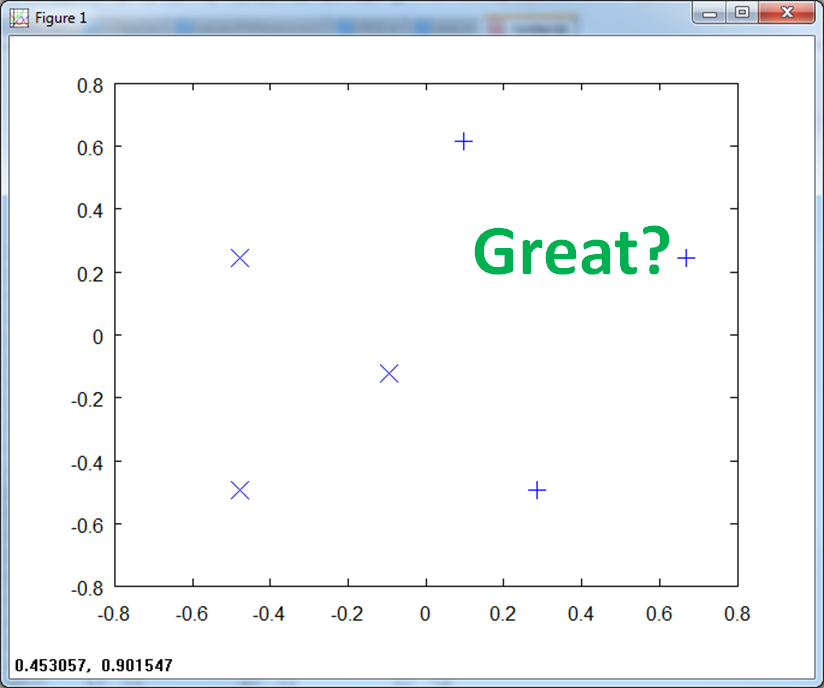 If we normalize to class specific magnitude, it makes matters worse. We no longer have clean separation of the classes. 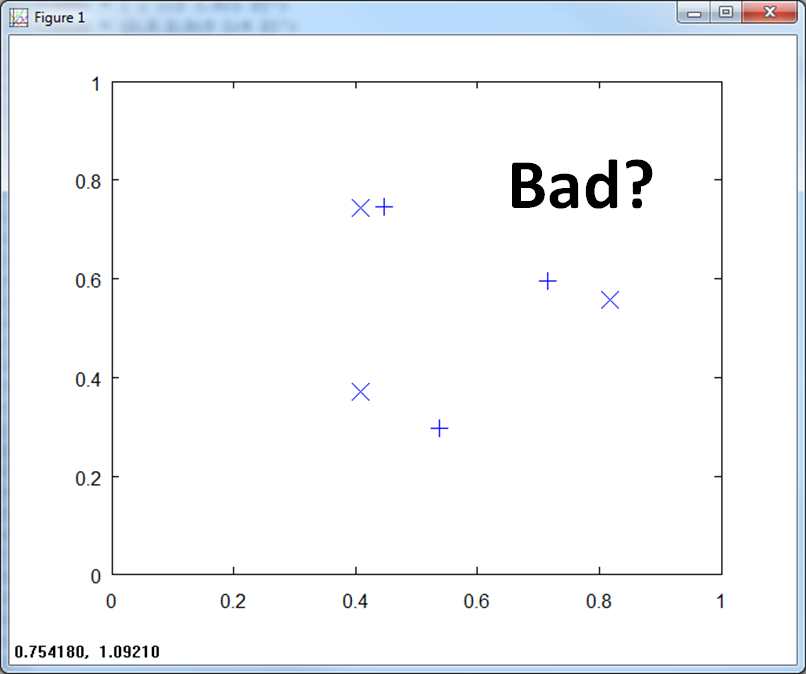 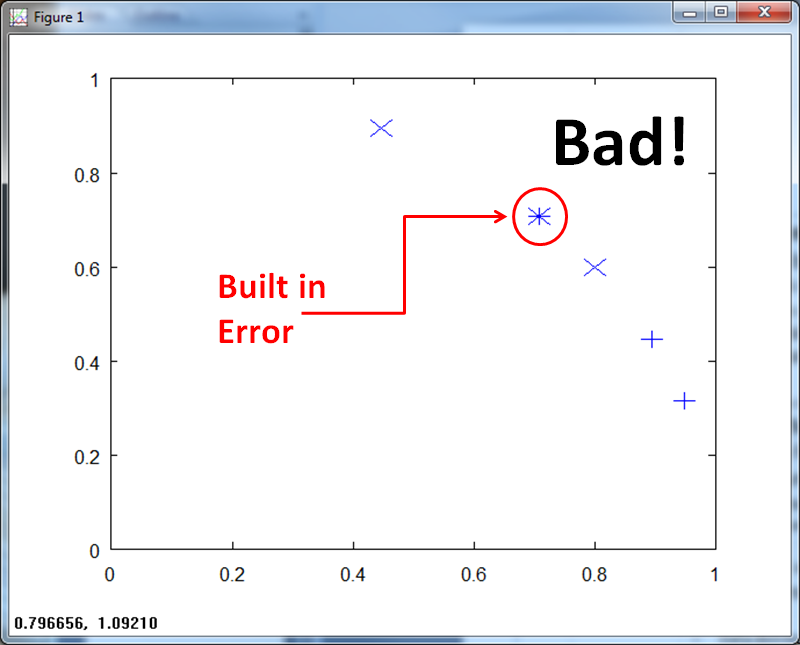 Now let's look at the effectiveness of PPNN vs. the k-nearest neighbor algorithms. KNN provides another non-parametric method of classification. Instead of using a kernel to estimate the parent PDF, it looks at the k closest neighbors of the same class. In the graphics below the gray regions depict Class One (X) and the white regions depict Class Two (+).

First lets look at the case where we normalized each training pattern to class specific magnitude. If you recall it appeared to look bad, scrunching the two classes close to each other. 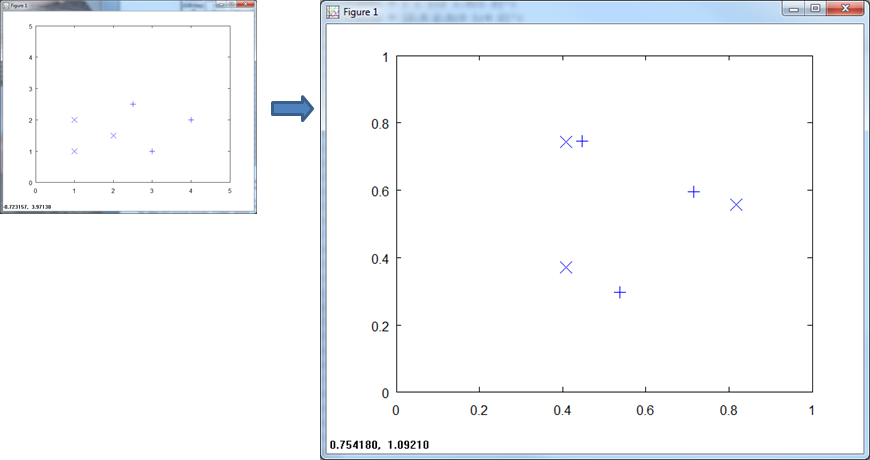 KNN, believe it or not, does a good job of classifying the data. 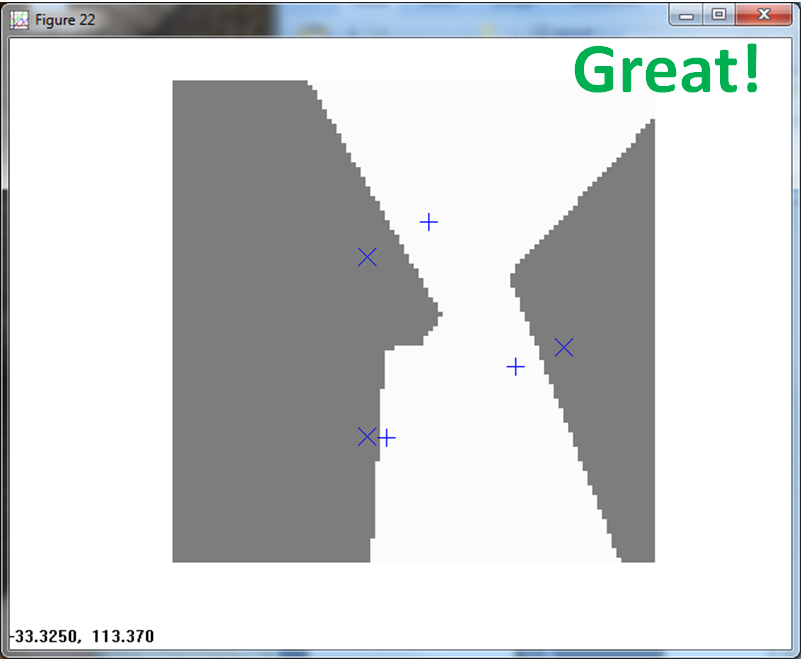 The PPNN, fails, classifying all of Class 2 as Class 1. 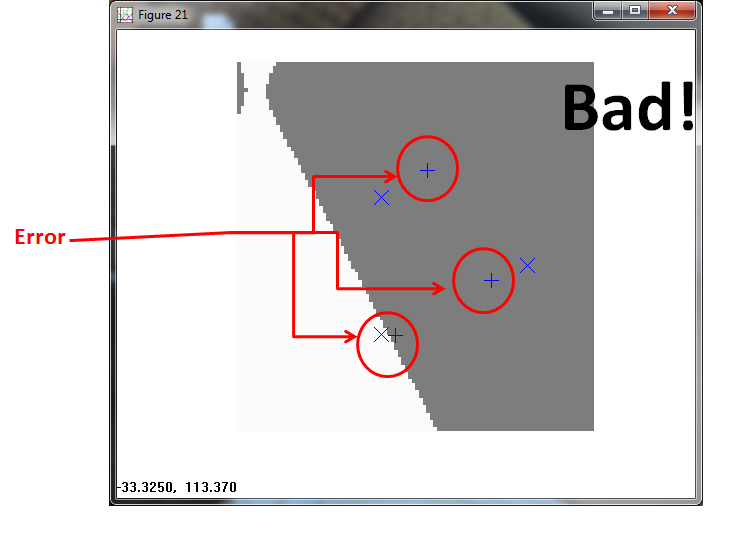 The second case scales the training data to (0,1) on both axis. 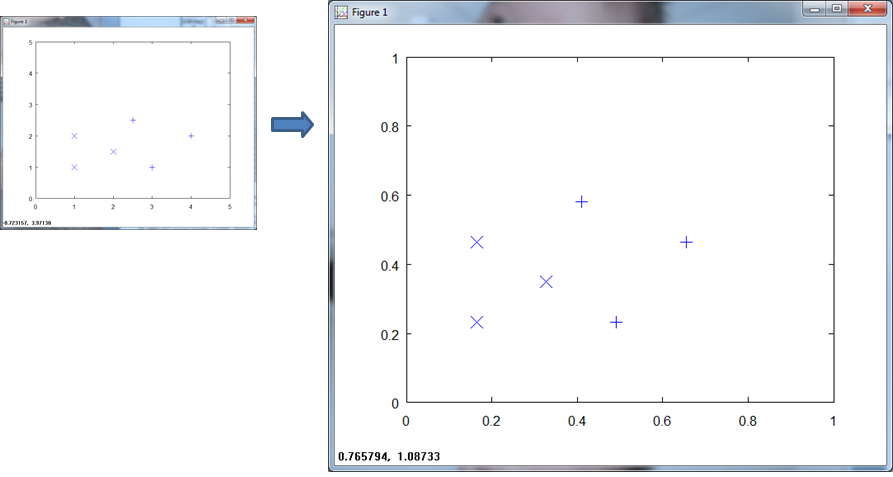 KNN handles the classification with ease. 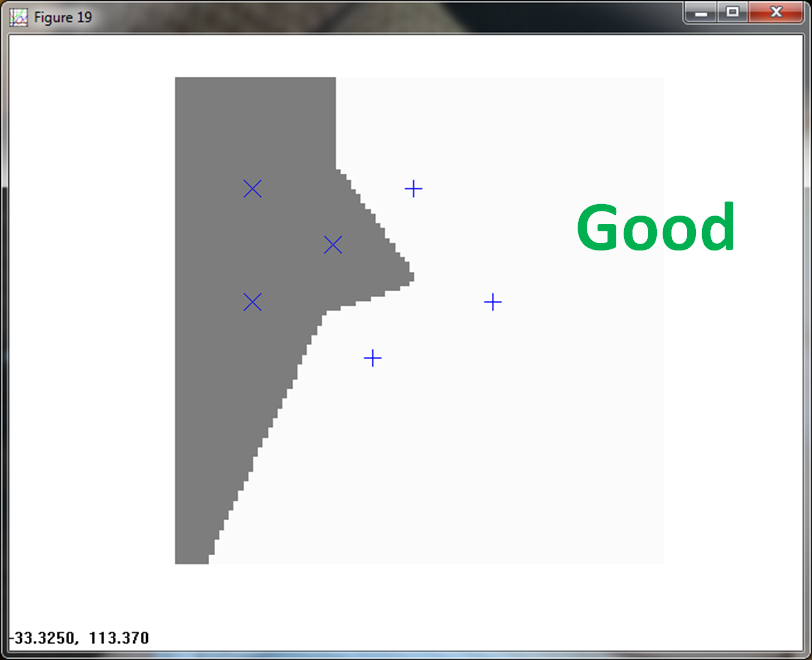 The PPNN (using σ = 1/4 ) fails. It allocates a tiny box region to Class 1, and classifies everything else to Class 2. 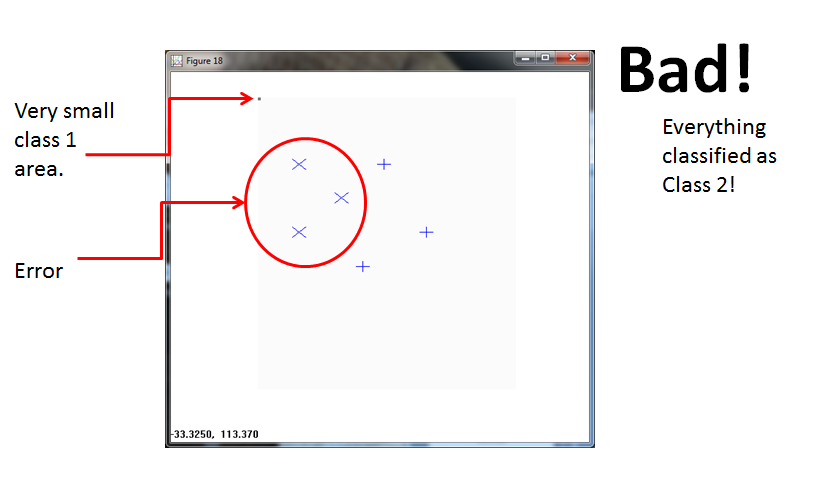 The KNN of course takes a hit due to the build in error. 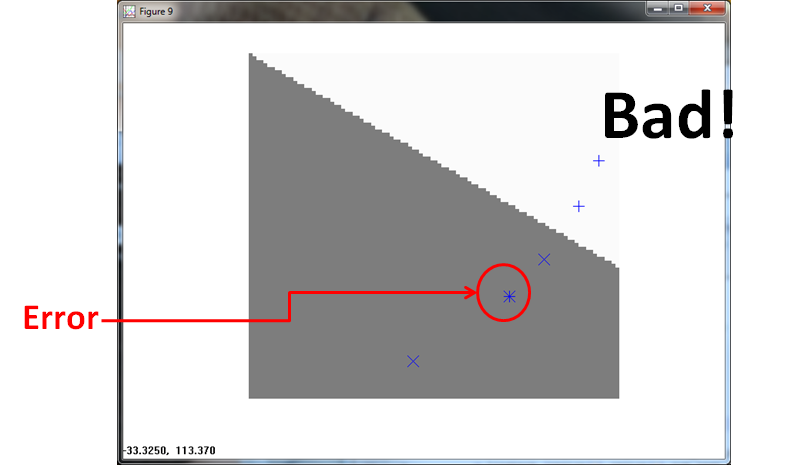 The PPNN (using σ = 1/4 ) misses twice, once for the built in error and once for a Class 1 observation. 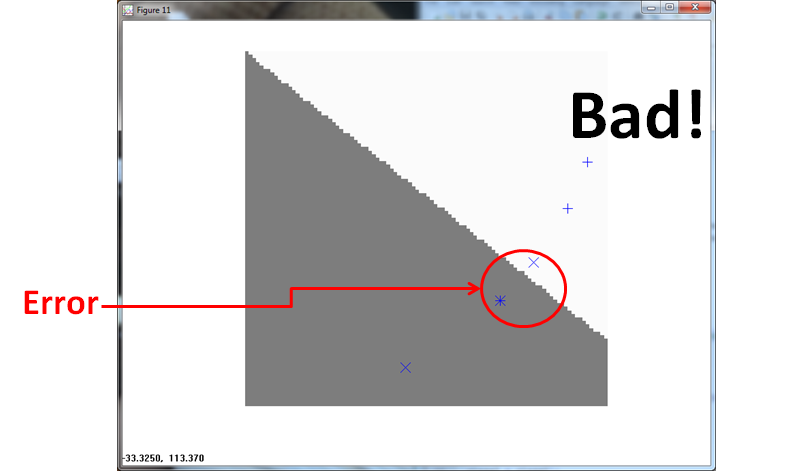 The final normalization approaches centers and normalizes the data. 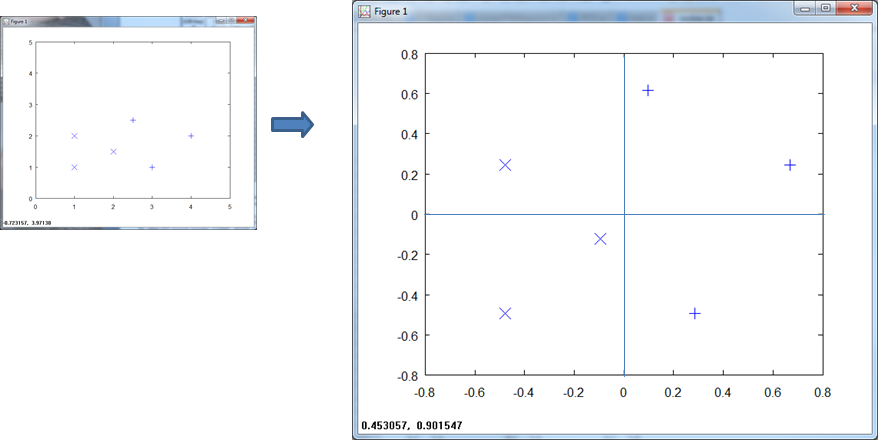 The KNN handles this with aplomb. 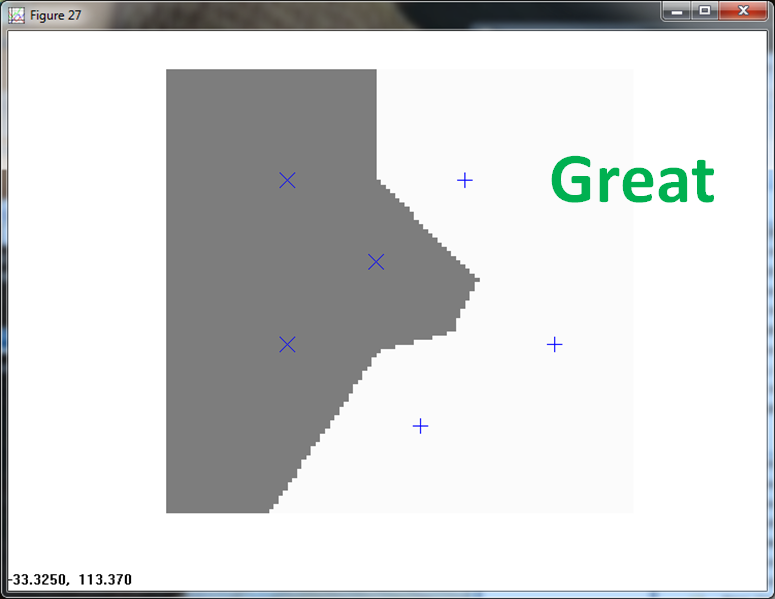 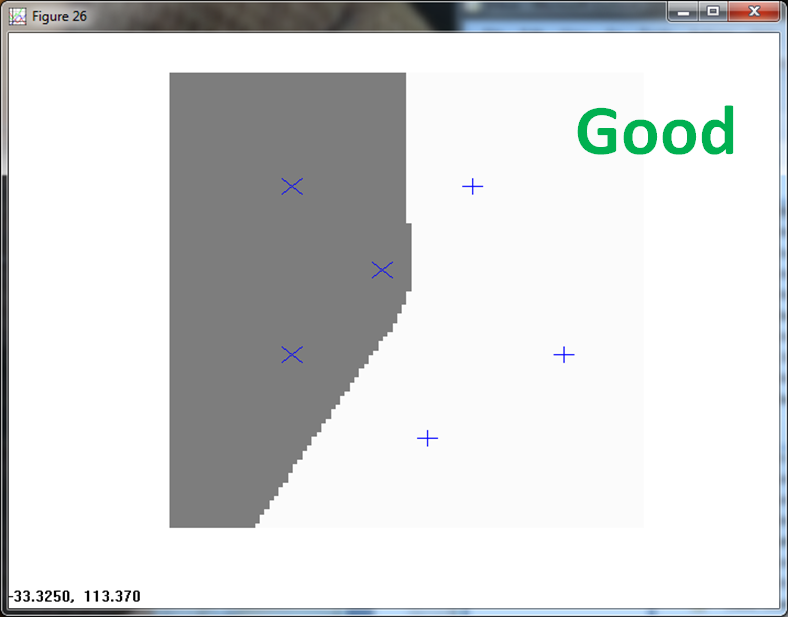 If you would like more details, I encourage you to read my detailed investigation of RCE.

Visualization of RCE on the normalization approach

The next animation shows the RCE classification footprints on the non-centered all samples normalized training data.

Normalized by class increases the amount of ambiguous regions. 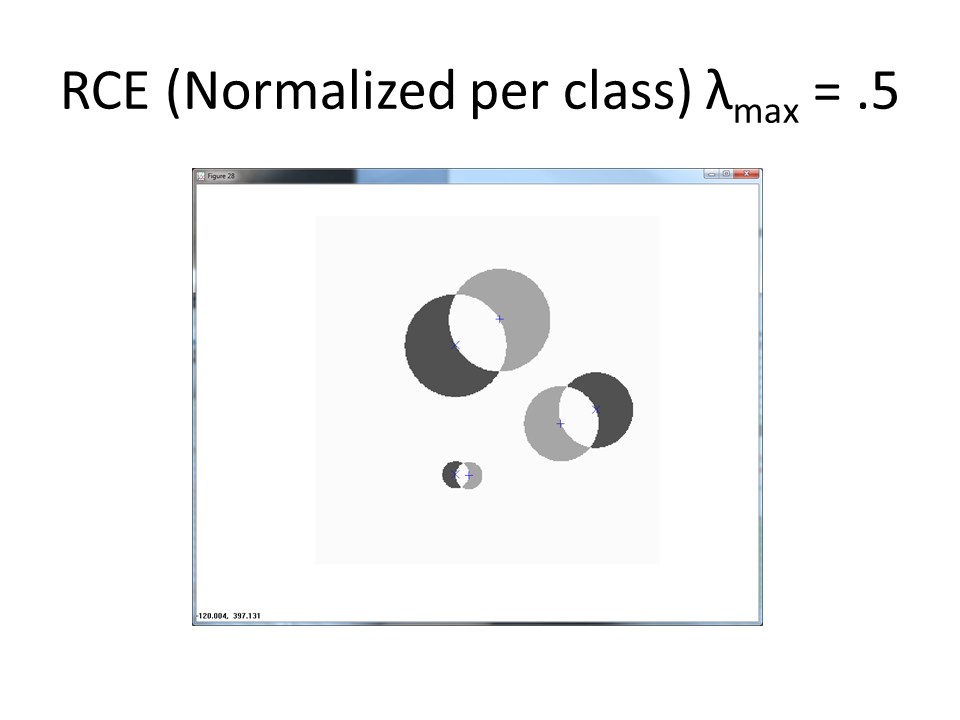 Once more, the built in error of the normalize by per-sample magnitude approach results in a miss. 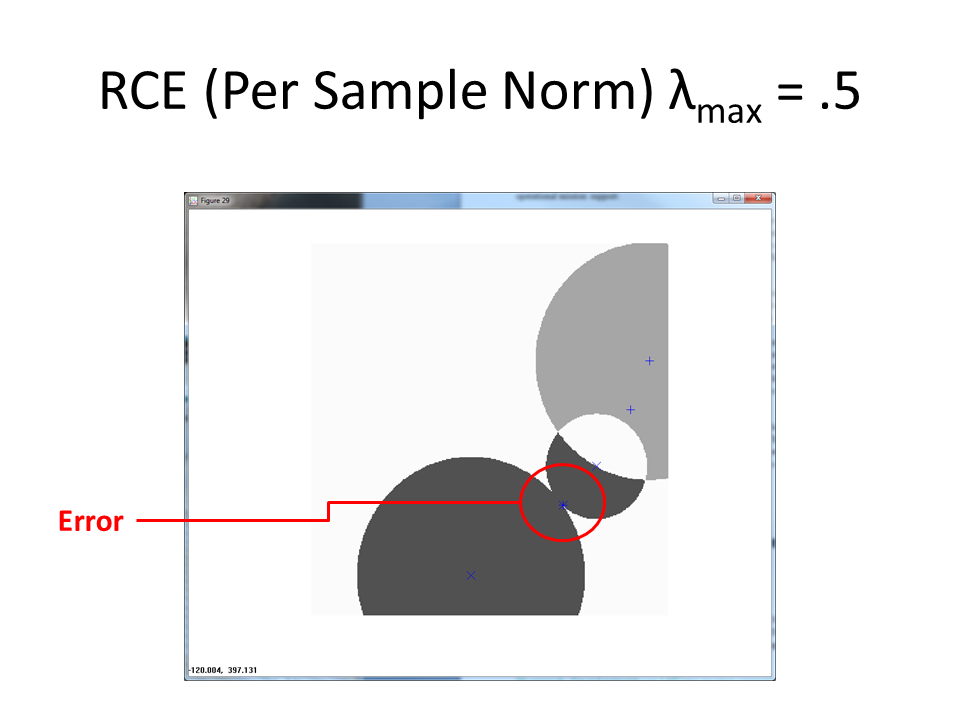 RCE provides the benefit of ambiguous regions. Ambiguous regions pinpoint areas that would provide useful training samples. The data scientist can then execute observations in those regions to fill in the gaps. 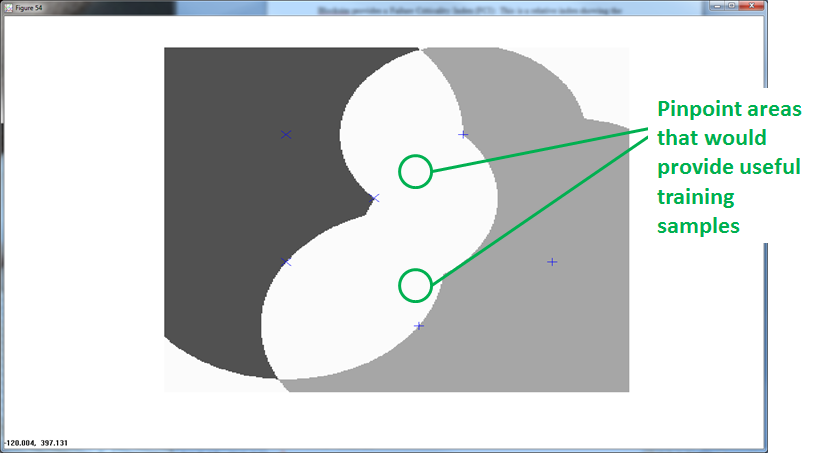 The following graphic shows how additional training observations filled in the ambiguity. 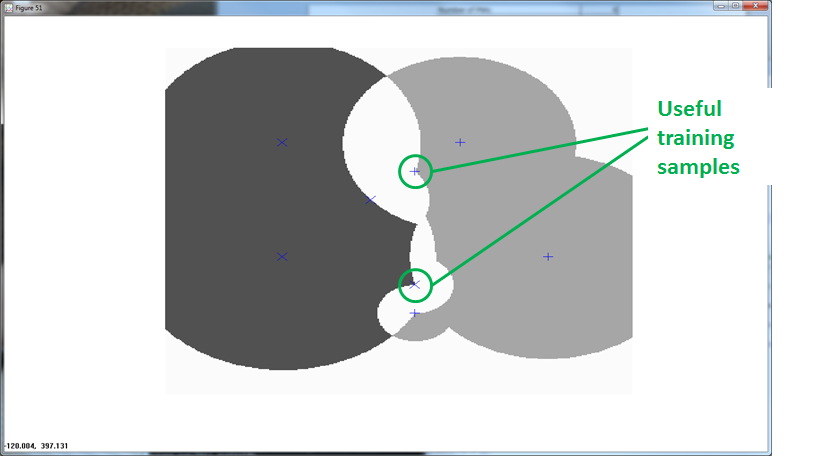 The final section summarizes my approaches to separating the training data I input into my detailed investigation of RCE.

For my investigation, I looked at the BUPA Liver Disorders data set.

I then wrangled the data set in order to increase the success rate of my classification. I used the following method:

Out of the box, you can see these two are poorly separable. 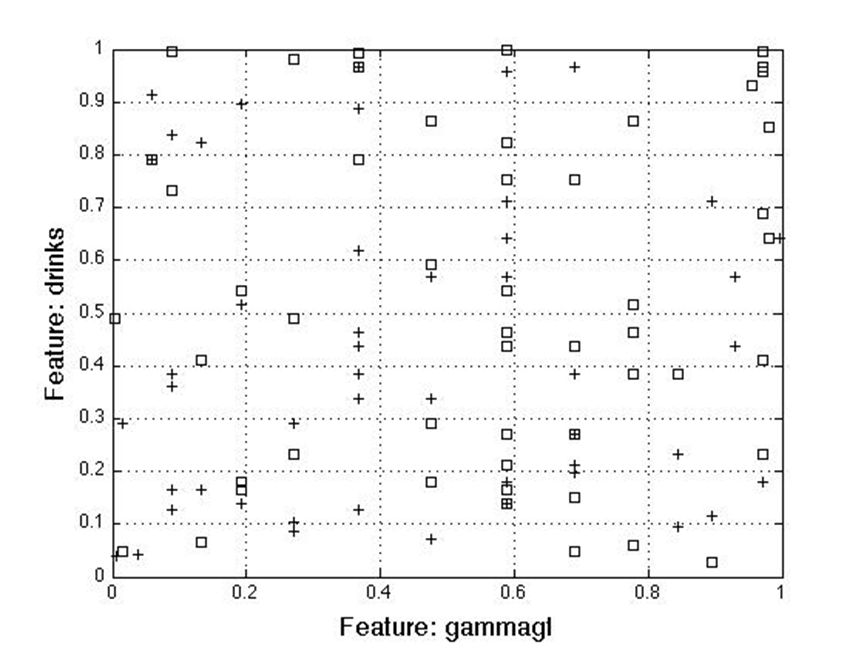 For the three feature case, the scatter method (left) added alkphos to the mix, whereas divergence and Bhattacharyya added sgpt.

The following diagrams show the three dimensional separation approaches based on a normalized test set. I used the training μ and σ to normalize the test set. 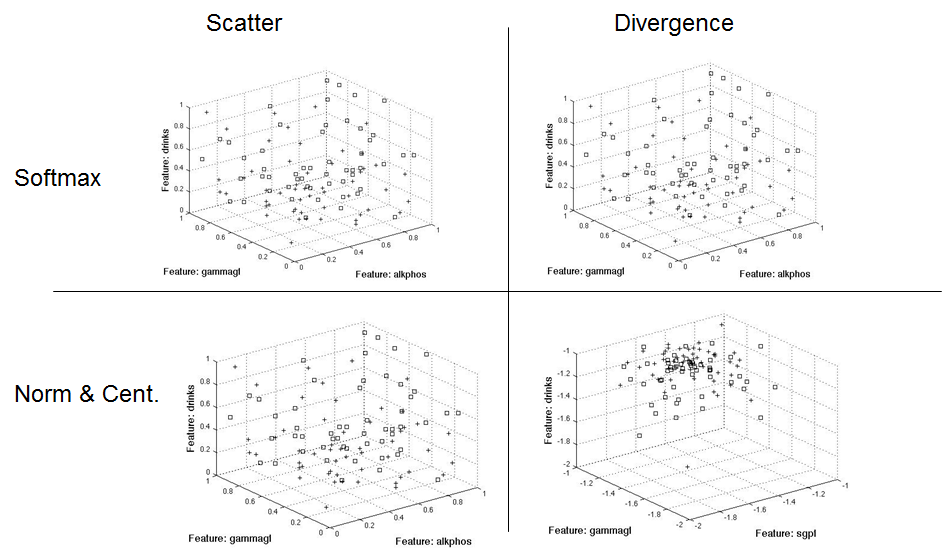 This graphic shows the same approach, only using the test set's μ and σ to normalize the test set. 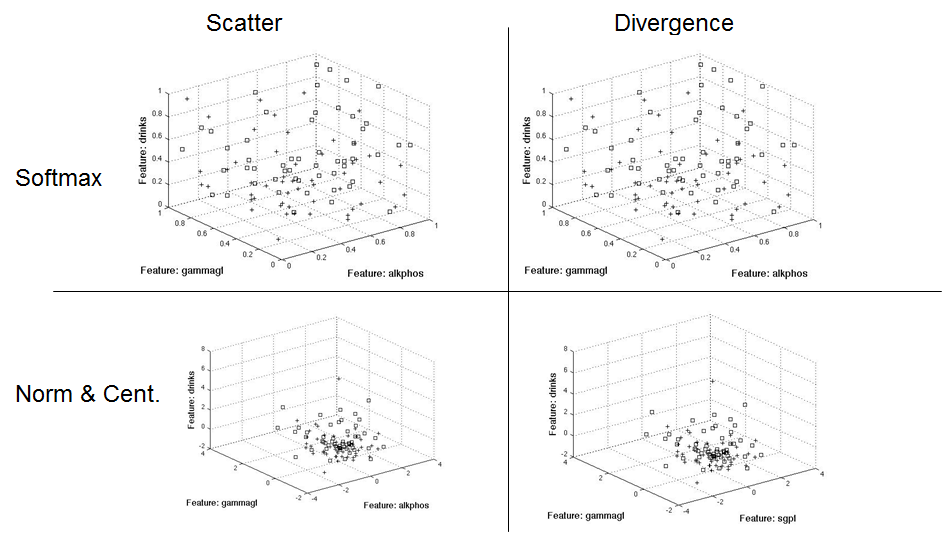 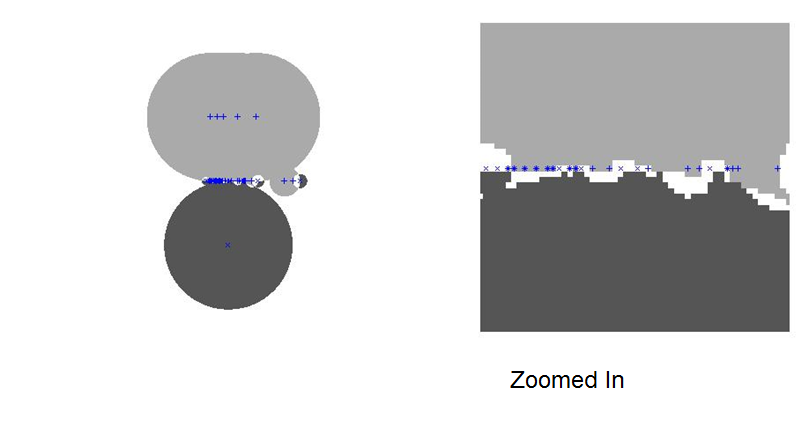 For detailed results of my investigation, I encourage you to read my detailed investigation of RCE applied to the BUPA liver disorders data set.

I leave you with convenient bullet points summarizing the work we accomplished today.

If you enjoyed this blog post, please check out these related blog posts: