Engineers face the reality of imperfect and noisy channels when designing digital communication systems (DCS). The engineers must account for signal degradation to ensure that a receiver receives the message that the transmitter intended.

The classic kids’ game “telephone” is a familiar example of a noisy channel. The first child whispers a message into the next child’s ear. She whispers, “I would like an ice cream sandwich right now.” The second kid relays this message to the next, who either due to poor hearing or creative mischief may or may not alter the message slightly. At the end of the line, the last kid relays the message to all in attendance: “John Sobanski writes the best tech blog on the planet!” More austere examples of noisy channels are space to ground link terminals, radio channels, or even old disk drives.

Engineers use two approaches to improve communication reliability on a noisy channel. The first approach is error detection. Error detection allows a receiver to flag incoming messages as corrupt. As this point, they have the option of dropping the data or requesting a re-transmission.

Error detection works well on systems that have a back channel. An example of such a network is the modern Ethernet LAN. For simplex communication systems, such as satellite communication systems, a receiver may not have the luxury of requesting a retransmission. Real time systems, furthermore, may have a communication link available but may not have the luxury of time to send a retransmission request. In these instances, engineers use error correction to make the noisy channels more reliable (Tanenbaum 206).

The field of mathematics and engineering that deals with making noisy channels more reliable (that is, bringing the noise down to a theoretical lower bound of zero) is called coding theory. The two main fields of coding theory are source coding and channel coding. Source coding deals with compression, or the act of making a data set smaller to fit through a bandwidth limited channel. Effective compression techniques look at the probabilities of certain symbols in deciding which codes to pare from the alphabet. The fundamental measure of average information content is known as entropy.

For example, the English language alphabet has 26 symbols, or characters, but some occur more frequently than others. Lexicographers have looked at millions of pages of texts to discover that the letter e occurs 171 more times than z. A source coding developer could bet that the letter z would not be present in a message containing 50 characters. He would also remove the letter q (1/126 less likely), x (1/84) and j (1/83). By using probability to hedge his bets against the occurrence of these letters, he compressed the alphabet to 22/26 its original size, or by 15%.

DCS engineers must reliably transmit an acceptable number of bits per second through a noisy channel (B) using at most W watts. Engineers call this trade B vs. W. A transmitter, whether it be a radio station or satellite has an average energy of Eb = W/B Joule per user bit available to generate a signal destined for a receiver. Coding can improve this ratio, which engineers call “coding gain.”

A maximum likelihood receiver detects the received signal with amplitude r and makes a hard decision as to whether it is a 0 or 1 based on its value in relation to γ. Due to the Gaussian nature of the maximum likelihood receiver, the probability of error becomes the probability under the tail of the Normal Gaussian pdf , or Q(Eb/N0), with Q the standard complementary error or co-error function.

Eb/N0 is the figure of merit for DCS, with Eb as the bit energy (signal power times bit time) and N0 as the noise power spectral density. For a codeword set M containing 2k codes, with k bits per codeword we deduce that k*Eb is the energy per codeword. This is because we need to send the channel bits 1/k times as fast to reach the rate of B user bits per second. If we have the same constraint of W watts as before, we now only have an available energy of Es = W/k = k*Eb Joule per channel.

Inserting this information into the same AWGN channel and maximum likelihood receiver as before, our error rate per channel bit is now equal to Q(sqrt(k*Eb/N0)). We gain reliability, therefore, at the cost of energy per bit. For equal error probability after decoding, we call the ratio between SNR (uncoded) and SNR’ (coded) “coding gain.” Engineers represent the coding gain in Decibels, or 10log10(X), with X as the reference level. For example, a coding gain of 3dB doubles the reference level, that is 10^.3 = 2. (Lint 29)

To achieve coding gain, channel encoding uses variable length symbol codes, which encode one source symbol at a time. We call a collection of symbols or characters an alphabet. For a given Eb/N0, coding trades throughput for noise mitigation by adding “code” bits along with the “error” bits. When we use an n bit code word to transmit k data bits, then we have m = n – k code bits per code word. We refer to the efficiency as a code rate, represented as either (n,k) or k/n (Gremeny 9- 7).

If we consider the code words as two binary vectors, then the number of coordinates where the two vectors differ is the Hamming distance. The distance between these two vectors aid in discovering the probability we will decode in error. Decoding errors occur when noise transforms a transmitted codeword t into a received vector r, with r closer to another (wrong) codeword (MacKay 206).

How do we discover the Hamming distance? Looking at the required minimum Hamming distance for reliable correction of t errors, dmin = 2t + 1, when C has M words, we must check “M choose 2” pairs of codewords to find d using brute force. We’ll find that linear codes, discussed later, require less computation, since for a linear code C the minimum distance equals the minimum weight (Lint 36).

A useful exercise, however, is to get a qualitative feeling for the effect of the minimum distance on decoding errors. Look at a low weight binary code with blocklength N and just two codewords passing through a binary symmetric channel (BCS) with noise level f. Since we have only two codewords, the decoder can ignore any data bit position that is equal for both codewords, that is, a bit flip in those positions will not effect the probability of decoding error. The error probability is dominated by the probability that d/2 of the non-equal bit positions are flipped. The probability of block error is therefore “d choose d/2” * fd/2 * (1 – f )d/2.

If a block code has distance d, then its block error probability is at least this, independent of blocklength N. Above, we labeled codes with d independent of N as “very bad.” Engineers, however, have a habit of bending mathematics to get the job done. In reality, “very bad” codes work in practice. Consider disk drives. If we have a disk drive system with 10e-3 Pe then a codeword distance of d = 30 is smaller than 10e-20. Good codes for disk drives need an error probability smaller than 10e-18, so this “very bad” distance suffices (MacKay 215).

In Block encoding, we map data (message) words to code words. We encode each block of k data bits by a unique code word that is n data bits long. We refer to such a code that can correct up to t errors as an (n,k,t) code (Gremeny 9 - 13). Additionally, we note an n-length k-dimensional linear code with minimum distance d as an [n,k,d] code, or (n,M,d) with M representing the number of codewords. (Lint 35).

Taking alphabet Q as the n dimensional vector space, we refer to the subspace C of Qn as the collection of code vectors. We call a k by n matrix for which the rows are a basis of liner code C a generator matrix G (Lint 35). The generator matrix allows us to only store the k rows of G instead of having a lookup table of size 2k in memory. We can form any of the necessary 2k code vectors by multiplying a message row vector by the generator matrix.

A code C is systematic on k positions if |C| = 2k and we have one codeword for every possible choice of coordinates in the k positions. We call the symbols (1 or 0 for binary) in these k positions information bits (Lint 36). Any [n,k] code, therefore is systematic on at least one k-tuple of positions. In other words, a systematic linear block code generator matrix maps a message vector onto a code vector such that the resultant code vector contains the original message vector plus m additional bits. 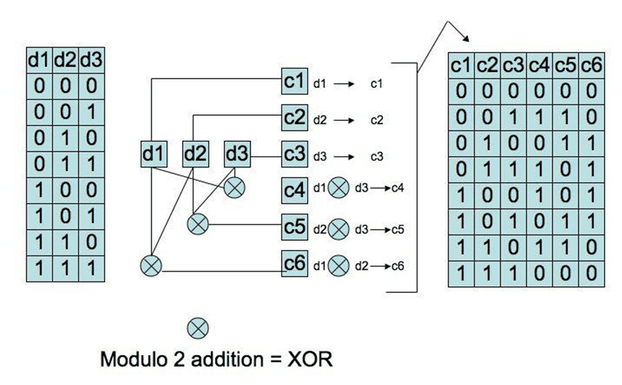 A systematic linear block code generator matrix has the form G = [ P | Ik ]. We call P, the first part of matrix G the parity matrix. From this we can create the parity-check matrix H = [ In-k | PT ]. We use H to create the syndrome test matrix S = rHT, with r a received code vector. The syndrome test matrix produces a syndrome. We have a coset on hand that maps all expected syndromes to error patterns. Once we lookup the error pattern for a given syndrome, we add it to the received vector at which point modulo 2 addition will correct the error (Sklar 333).

In this blog post we discused noisy channels, coding gain, hamming distance and block codes. Next month we will deep dive into Convolutional codes.

If you enjoyed this blog post, you may be interested my discussion of a Discrete Event Simulation (DES) for Adaptive Forward Error Correction (AFEC).

Otherwise, be sure to proceed to part 2.