Over the air communications, such as text messages, satellite radio, walkie talkies and WiFi need to deal with the unpredictable effects of noise in the channel. Coding theory attempts to make noisy channels more reliable by bringing the noise down to a theoretical lower bound of zero. Channel coding, as opposed to source coding, provides a lossless method of reducing noise.

Convolutional codes produce n code bits in response to the k input bits from both the current time unit and the previous N-1 input data bits. We refer to convolution codes as (n,k,L), with n and k equal to output and input bits respectively. We define L, the constraint length, as L = k(m-1), with m equal to the number of memory registers. The figure below describes an encoding device: 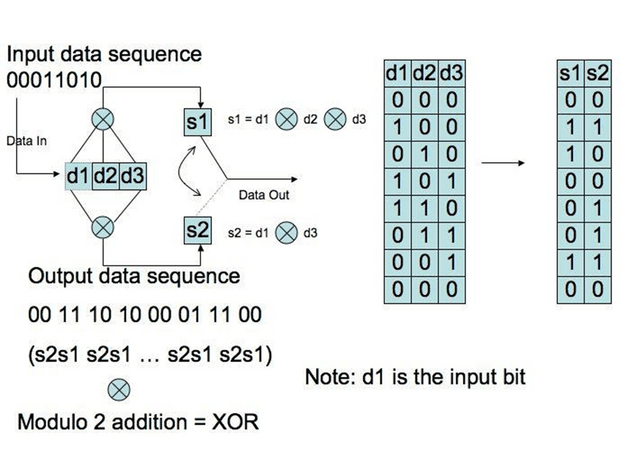 The constraint length is 3, with n=2 output bits. Squares d1, d2 and d3 represent the flip-flops that can be in either state 0 or 1. They are connected to modulo two adders to represent the generator polynomial. An external clock produces a signal every t0 seconds (assume t0 = 1), causing the contents of the flip-flops to move to the right (i.e. a shift register). The modulo 2 operations produce the output bits s1 and s2 (Lint 181).

Lint prefaces the previous diagram with “every introduction to convolutional coding seems to use the same example. Adding one more instance to the list might strengthen the belief of some students that no other example exists, but nevertheless we shall use this canonical example (182).” Most of my sources included this diagram, and the state diagram that follows, yet despite its ubiquity I did not find a clear explanation as to how the latter followed the former. For that reason, I decided to look at the problem until I could describe it to a layperson. The state diagram is actually quite simple. 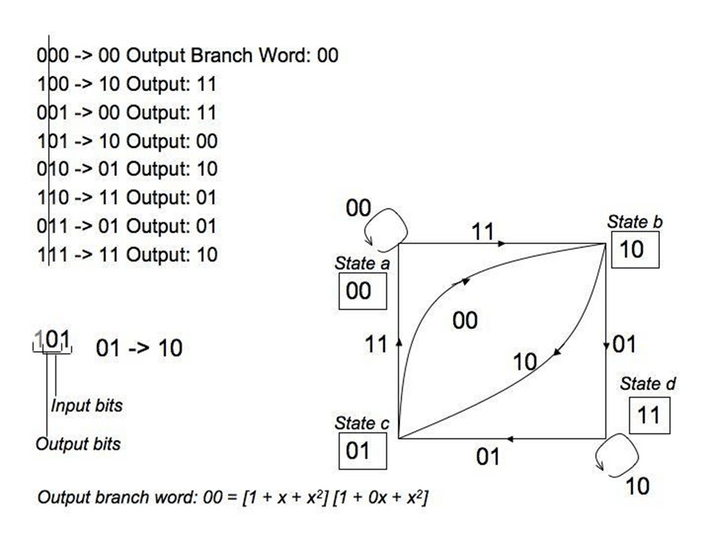 The first two bits show the output bits, and the number in the parenthesis shows the operation of shifting in the input bit, or the output state (Langton 12). The tree diagram is not the preferred diagram for engineers. In the diagram below, the state diagram is added for reference, with the 1 input bits highlighted by a red circle: 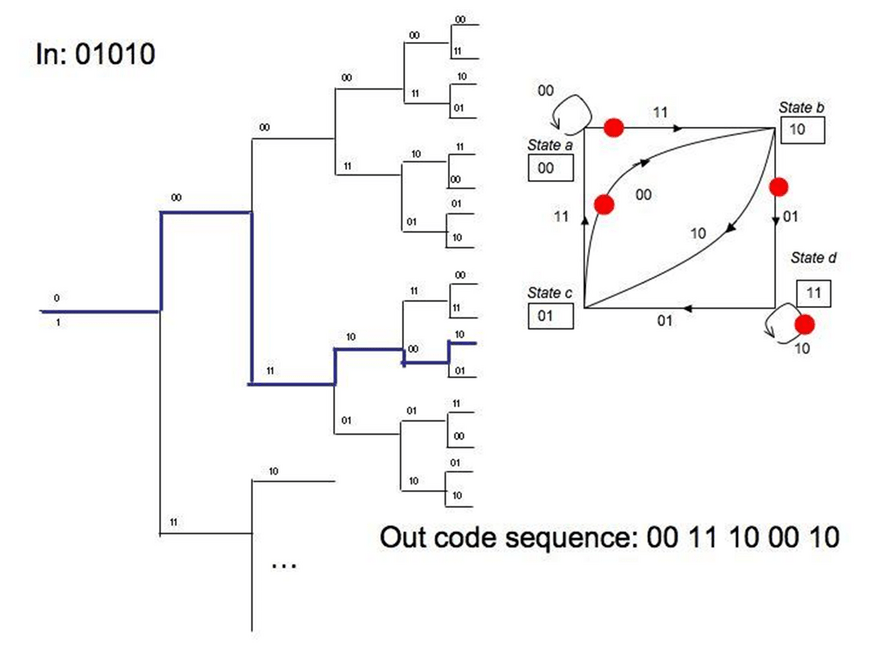 The preferred method is the Trellis diagram. We draw all states on the y-axis. The x-axis represents discrete time intervals. When we receive a 0 we go up using a solid line, for a 1 we use a dashed line flowing down. On the line we write the output, or the codeword branch. After L bits, all states are reached, and the diagram repeats. Coding is easy with a Trellis diagram, for an input string, we merely go up for a 0 bit or down for a 1, and copy down the codewords along the path. 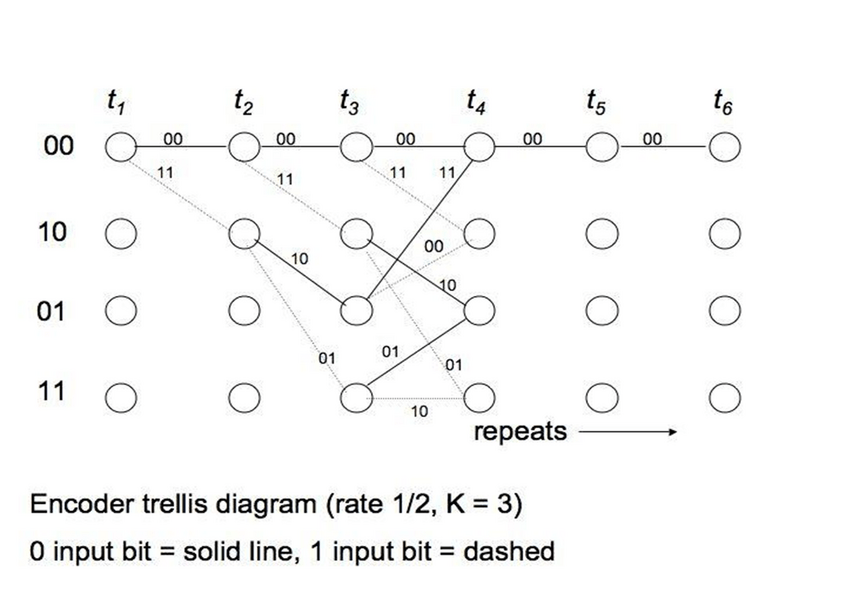 Viterbi implements maximum likely-hood decoding by reducing the options of a Trellis path at each time tick. When a decoder receives a branch code that is not possible for the current state, it simultaneously calculates two separate paths and assigns each Hamming metric. At any given time tick t, the trellis has 2L-1 (L = constraint) states, and each state can be entered by one of two paths.

The key to Viterbi decoding algorithm is to assign metrics to each of the paths and sloughing off one of them. The winning path is known as the survivor. The Viterbi algorithm uses these principles (1) That errors occur infrequently and the probability of error is small and (2) The probability of burst errors is much less than that of a single error (Langton 21).

FEC using either block or convolutional codes trade bandwidth for a lower bit error rate for fixed power. Communication can be simplex and real time, but the receiver must decode and correct errors. Block codes operate on blocks of bits. We break a chunk of data up and add error correcting bits to it. Convolutional codes are continuous, and operate on bits continuously.

If you enjoyed this blog post, you may be interested my discussion of a Discrete Event Simulation (DES) for Adaptive Forward Error Correction (AFEC).