This month's blog post continues to discuss the evolution from hierarchical to Flat Internet Ptotocol (IP) Architectures for mobile networks.

Be sure to read Part One if you have not already.

This post briefly discusses the components of mobile data technology evolution and lists the strengths of a flat Internet Protocol (IP) architecture. I compare and contrast the flat architecture to the traditional hierarchical and centralized (H/C) approach. Flat IP architectures, vs. H/C approaches enable scalability that can accomodate the traffic explosion witnessed by modern Mobile Networks [Bokor 1]. This post also looks at the evolution of mobility management (MM) in relation to flat and H/C architecture scalability, and discusses the MM approache of Dynamic Mobility Management (DMM). 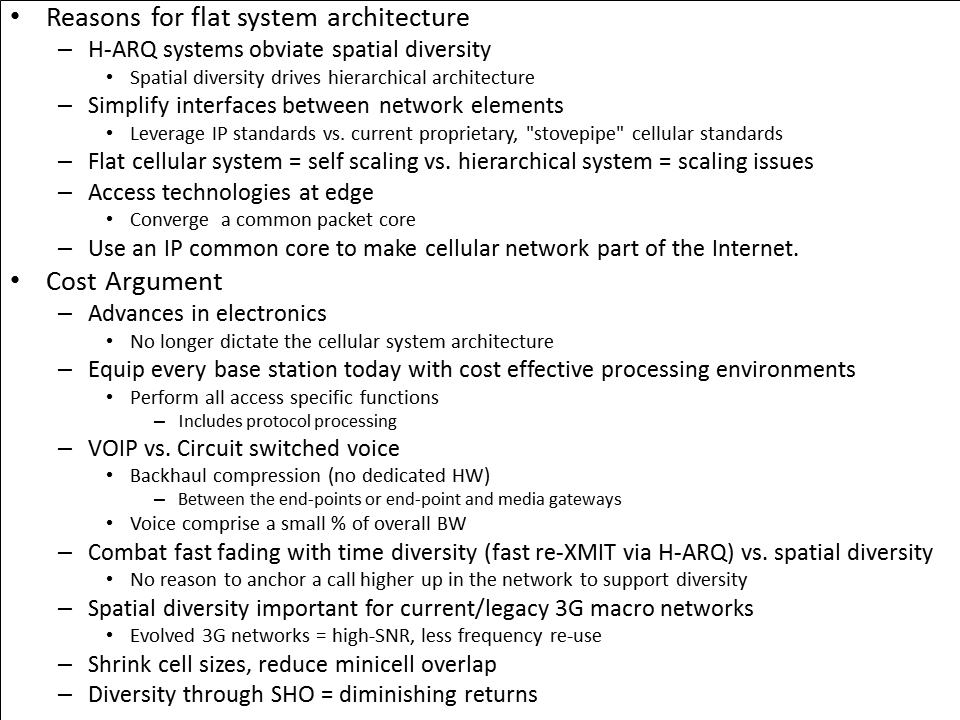 Mobile engineers work towards an ultra flat architecture (UFA). The UFA contains one node, a base station (BS), which executes both data forwarding plane and control plane functions and includes the IP Multimedia Subsystem (IMS). The UFA distributes IMS and mobile NW functions into the BS. The establishment and MM procedures integrate Quality of Service (QoS) and controlled via the NW. [Daoud 797].

Now that we have discussed the differences between H/C and Flat architecture approaches, we now look at one of the most important functions of mobile packet switched architectures, mobility management (MM). Older MM solutions rely on H/C architectures since they employ anchor nodes for mobility signaling and user traffic forwarding. H/C MM plumbs explicit routes (or tunnels) through the hierarchy of the system to one or more base stations that maintain wireless connections with a mobile. In the UMTS packet service, for example, the Gateway General Packet Radio Service (GPRS) Support Node (GGSN) forwards the IP packets to the Serving GPRS Support Node (SGSN) which then tunnels the data to the RNC which processes the IP packet into transport blocks and forwards those transport blocks over ATM to the Node Bs. [Bosch 3865].

Consider a mobile in a paging area (a set of BS). In the H/C a central node (e.g. RNC, MSC or SGSN) maintains available mobiles for paging areas. If the central node receives an incoming call for a dormant mobile phone it initiates access-specific paging functions to the paging area. All the BS in the paging area transmit a page over the paging channel in their cell to find the mobile. The mobile receives the page, wakes up and re-establishes contact. The central node then delivers the IP packets. [Bosch 3865].

Flat systems, however, do not have a central anchor for call or IP packet receipt. A BS assumes the role of the central node (usually the mobile's BS of last attachment becomes anchor point). An incoming call or IP packet now arrives in the last point of attachment. Like the H/C, the anchor point n-point unicasts to the paging area. The BS in the paging areas all page the mobile, and the mobile responds to one of the base stations. If the mobile responds on a different BS than the anchor, the BS relocates state associated with the mobile from BS to BS before initial call or IP packet delivery completes. [Bosch 3866]. Hybrid Automatic Repeat reQuest (H-ARQ) drives a flat architecture, since it obviates the need for spatial diversity. Spatial diversity drives a H/C. We can have four mobility management approaches, either H/C or Flat, and with H-ARQ or without H-ARQ. I put together a quad chart, derived from the text of [Bosch 3865], that summarizes the different approaches. 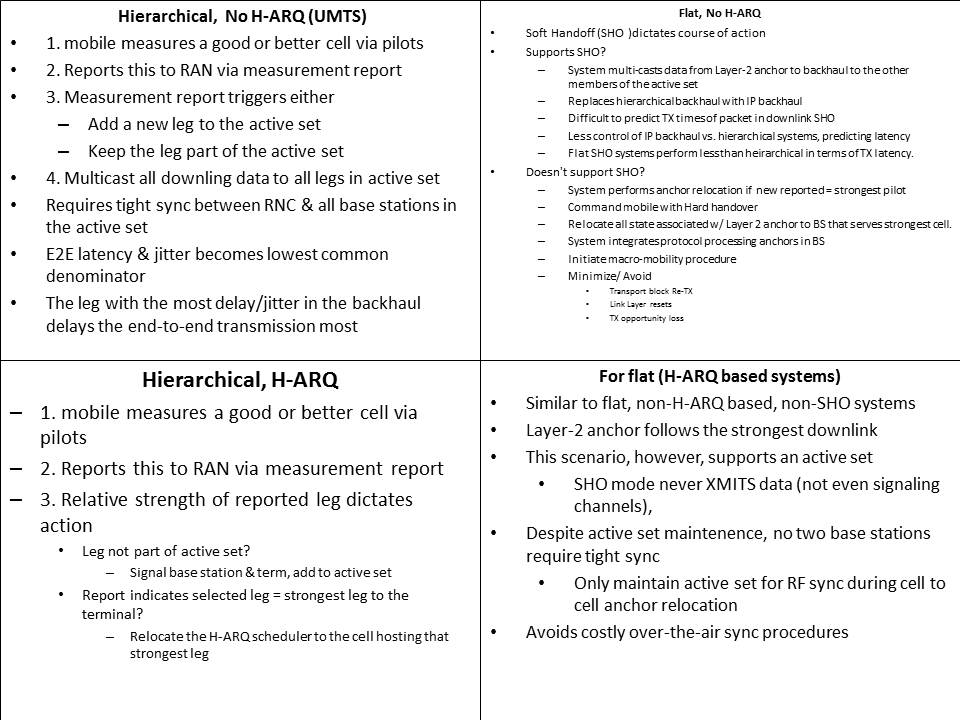 To avoid anchor points, or any notion of H/C in MM, we use distributed mobility management or DMM. I’ve summarized the text of [Bokor 44] below. 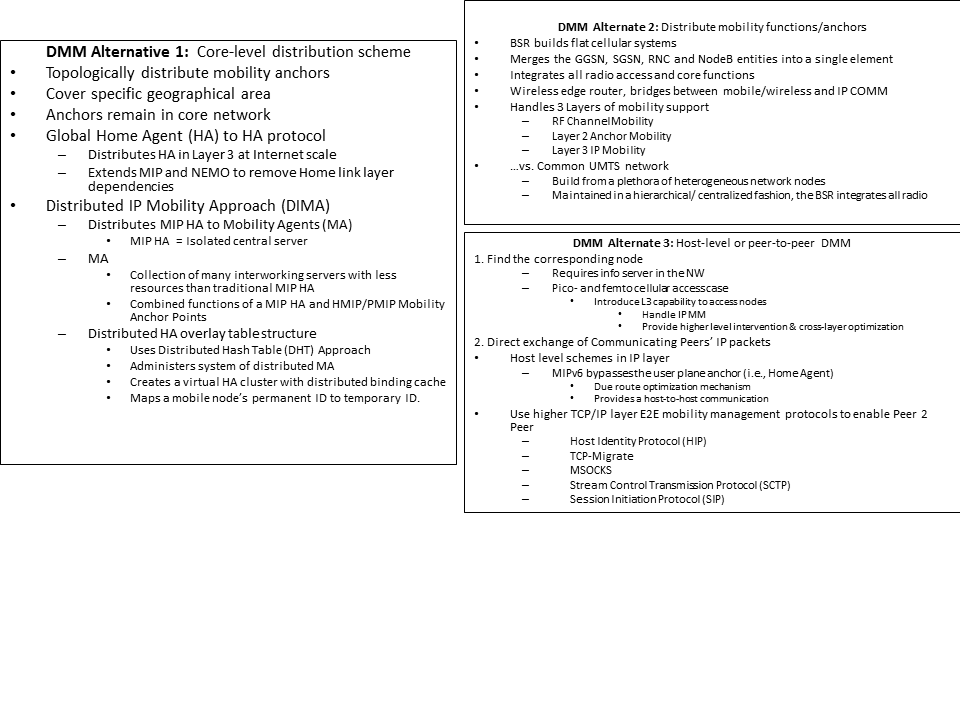 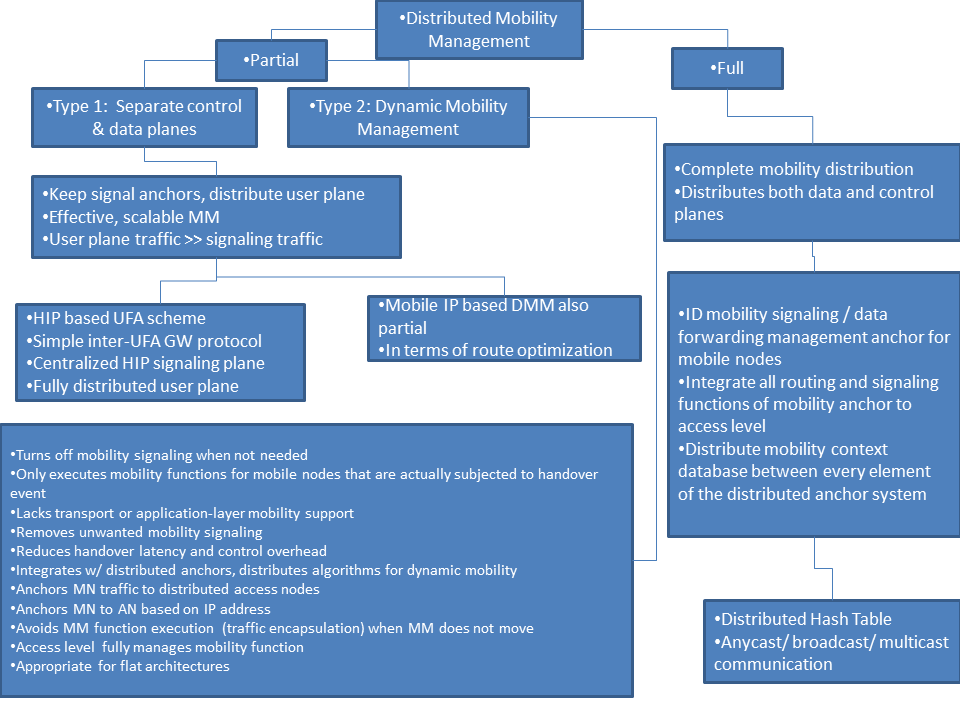 Ali discusses two IP based MM approaches in which the UE preserves his IP address, aka home address. In network based MM, the NW (access GW) detects if the UE changed his point of attachment. If so, the NW provides the UE with the same IP address, updates the mobility anchor in the NW and the packets arrive at the new UE point of attachment. The UE functions independent of MM signaling. In client-based MM, the UE obtains a new local IP address upon move, which we call the care-of-address. The UE updates the home agent and the home agent maintains binding between care-of-address and home address of UE. [Ali 59]. 3GPP uses PMIPv6 for IP MM between 3GPP & non3GPP (and also optional for intra3GPP). PMIPv6 provides handover capability within and between access systems with no perceivable service interruption. PMIPv6 minimizes delay from MM procedure with efficient use of resources. Wireless resources could be a potential bottleneck, so PMIPv6 minimizes UE involvement in MM (improve the battery life). PMIPv6 introduces the Local Mobility Anchor (LMA), the equivalent of a home agent that provides the topological anchor point for the home network prefix and manages the binding state of the mobile node. The PMIPv6 Mobile Access Gateway (MAG), acts as the proxy (foreign) agent for the terminal and handles the mobility signaling (e.g., a proxy binding update) toward the LMA upon terminal movement. [Ali 59]. In summary PMIPv6 for 3GPP EPC Release 8 provides inter-access system mobility, enables a common packet core for various access technologies, provisions QoS and executes seamless handovers. PMIPv6 achieves non-optimized handovers between 3GPP accesses and other non-3GPP accesses and optimized handovers between E-UTRAN and eHRPD. PMIPv6 supports UE multiple-access to EPC, provides MM and controls individual IP flow routes between different radio interfaces. [Ali 64].

Mobile communication systems move towards a flat IP architecture. Flat systems reduce complexity and leverage the technology of IP networks. This paper discussed the reasons behind Hierarchical and Centralized systems, and then followed their evolution to Flat and then Ultra Flat architectures. In addition, this paper discussed the evolution of the packet switched component of mobile systems. This paper also addressed scalability concerns and focused on the evolution and types of mobility management schemes.